52 Walker is pleased to announce its second exhibition, END OF SUBJECT, featuring the work of Los Angeles–based artist Nikita Gale. Engaged with the history and politics of sound and its surrounds, Gale will present an aurally and visually rich environment in the gallery, complete with light and sound, which calls upon the tacit agreement between the audience and the materials that enable the act of viewing and experiencing. Through the artist’s multidisciplinary approach, Gale recasts and destabilizes notions of witnessing, visibility, and representation that operate both inside and outside of the space as well as within and among our bodies.

As with Gale’s previous projects PRIVATE DANCER, presented at the California African American Museum, Los Angeles, in 2021, and AUDIENCING, at MoMA PS1, New York, in 2020, END OF SUBJECT proposes an intervention within 52 Walker’s architectural confines that engages the ideological apparatus and technological infrastructure of performance. The artist probes how a performance might be constituted in the absence of the human figure while reconfiguring the production of the experience of presence as it is mediated by the physical body—via such mechanisms as lighting, staging, atmosphere, and sound, as well as expectations shaped by existing social and political systems.

END OF SUBJECT considers the phenomenological limits of performance, how spatial hierarchies are stratified, and how transcendence and immanence are embodied by audience members. Here, Gale establishes bleachers as a kind of shorthand for the intersubjective act of witnessing: across the gallery, six sets of aluminum bleachers are distributed; three sets are violently crushed and made unfit for seating. Stage lights are mounted throughout the space, occupying some places in which the spectator would normally be present. A lighting program, automated by a show control system designed in collaboration with lighting designer Josephine Wang, shifts the site between dormant and active states. A synchronous four-channel audio installation features an original theme by composer Tashi Wada.

Reflecting on the material limits of ideology in END OF SUBJECT, Gale assumes the cycle of destruction and creation proposed by the framework of abolition. The exhibition attempts to instantiate the symbolic turning point of rupture in which both ruins and new social relations are formed. This trace evidences the physical and the ideological that continues to radiate after the annihilation of institutions, marking and formalizing the vestiges of the infrastructures that once prevailed. Drawing from a formal training in archaeology, the artist captures the moments in which the resonances of the destruction incurred linger and relations between subjects are challenged.

The exhibition will include a series of six drawings on aluminum panels, which also mark presence by creating an absence on the surface through processes of extraction. Gale etches words onto the smooth metal that move from quantitative to subjective descriptors and mounts mini spotlights onto their reflective exteriors. The artist envisions the thin metal layer as the protective interface between human beings and technology, shielding the physical body from technology or from the environment when encountered. Moving away from the pop-performance aesthetics of Gale’s previous presentations, END OF SUBJECT regards the particular experiential parameters of the sculptural in the visual and aural realms by focusing on the physical site and its infrastructure. As Gale has inquired, “What lies between the bodies and the sounds and the stage and the lights—what are we to each other in the act of witnessing? What have we agreed upon through the mere act of showing up?” 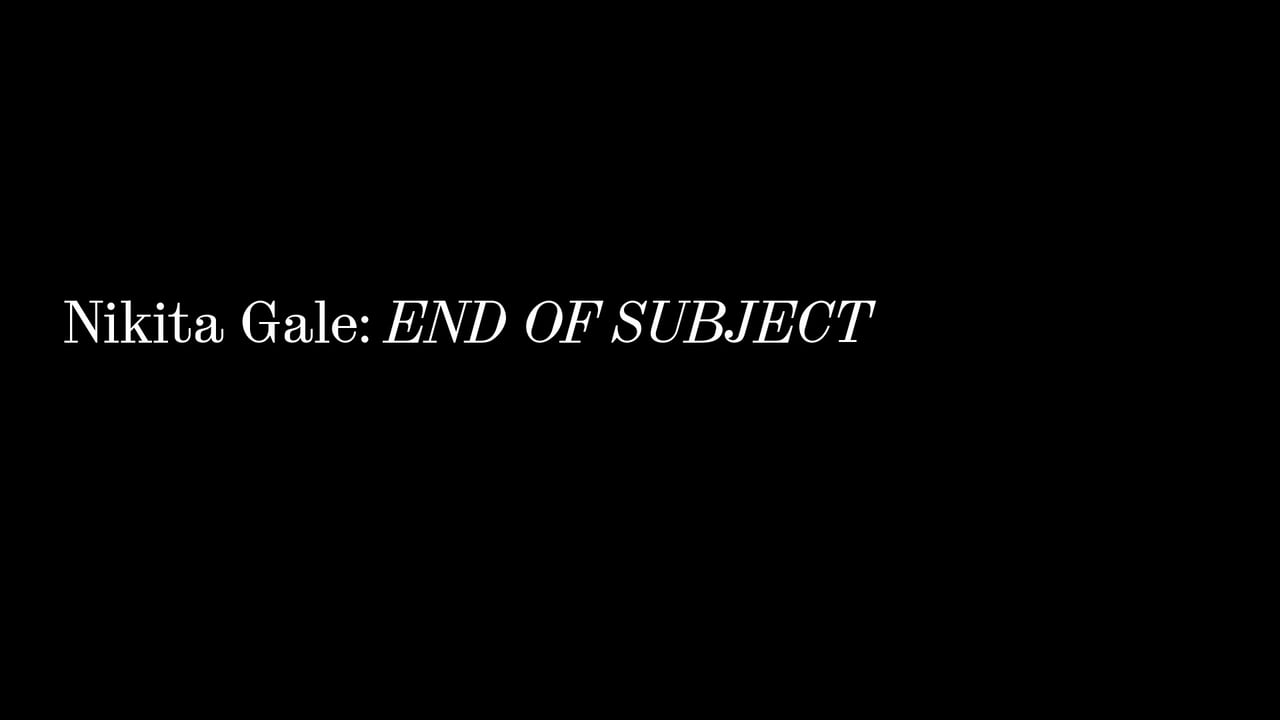